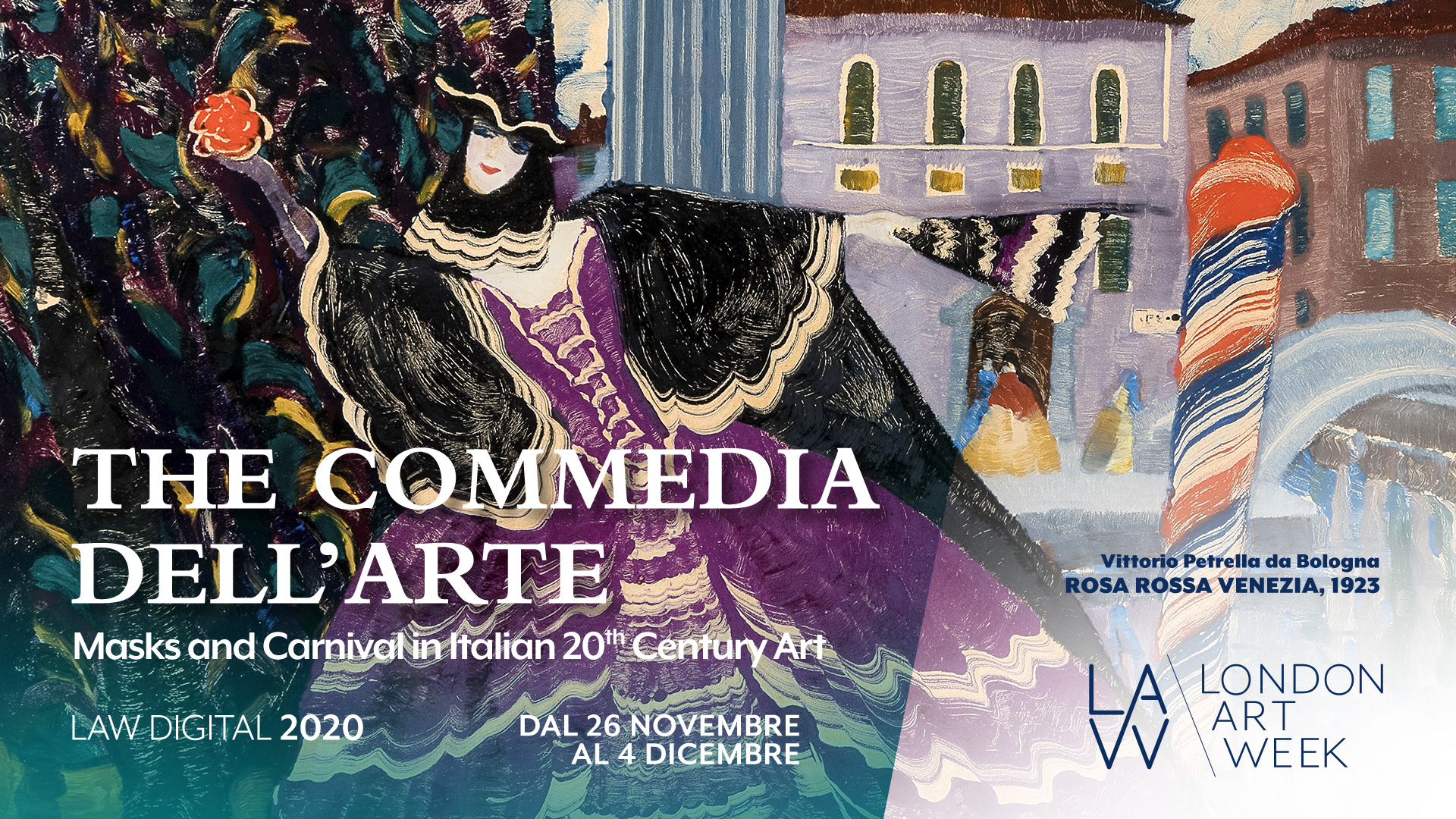 When she is not wearing a facemask covering her mouth to indicate that she is mute, the personification of painting, as portrayed by ancient painters, is a woman displaying in most cases a full face mask hanging from her neck. It is a symbol of the imitation of nature: art imitates reality, like an actor disguised to play a part. We want to remind this connection between the mask and painting for this exhibition by Laocoon Gallery celebrating, with the title of “The Commedia dell’Arte”, Italian masks in XXth Century art.

At the centre of this thematic collection is an impressive series of drawings by the visionary Italian artist Alberto Martini (1876-1954), a precursor of surrealism. His series “Il Libro delle Ombre” (The Book of Shadows), begun in 1904, consists of 29 drawings in brush and black china ink portraying masked faces in all possible kinds of disguise. Full false faces, vizards, half masks, eye masks, and black domino cloaks with venetian 18th century three cornered hats, all drawn with speedy brushstrokes as in Chinese painting, nocturnal and mysterious in character, illustrations of some dramatic and gothic poem whose words are lost. These enigmatic and obsessive faces, look like Rorschach’s patches appearing in a nightmare, populating some Venetian perpetual night, in which we wouldn’t be surprised to meet the heavily made up disquieting eyes of Marchesa Casati, famous for her eccentric venetian masked balls, for which Martini acted as costume designer and court portrait-painter.

With the figurative remembrance of Tiepolo in mind, we find ourselves in Venice, the ideal capital of masks, with her ancient old carnival where actors on the stage wore masks as well as the people in the audience.

A large painting by Ugo Rossi (1906-1990), almost four metres wide, portrays Venice’s piazza San Marco crowded with people in all kinds of colourful carnival costumes. It used to hang in the bar in one of the luxurious transatlantic ships that were the monuments of post war enthusiastic optimism, a way to represent Italy as a country of perpetual enjoyment after the horror and destruction of the past conflict.

Venetian scenes with carnival masks were a favourite theme of the artist Umberto Brunelleschi (1879-1949), a Tuscan who had a successful career in Paris as costume designer, scenographer and fashion illustrator. By him are two of his typical pochoirs with amorous couples courting, the study for a poster dedicated to a Venetian feast held in the Cercle de l’Union Interalliées in Paris. In another watercolour he paints his own portrait, it is the study for a poster advertising the theatre play “The Mask and the Face”, a now forgotten work by Luigi Chiarelli that had at the time wide international success in the footsteps of Pirandello’s influential example.

Directly inspired by Pirandello was the painter Giovanni Marchig, who’s masterpiece, “Death of an author”(1924), showing a playwright dead at his desk surrounded by all the characters of the “commedia dell’arte” in despair is now in Palazzo Pitti. He was an enchanting painter, little known because he put aside his painter’s brush in the last part of his life to become a famed old master’s restorer, very close to Bernard Berenson. His current fame comes from having been the former owner of Leonardo’s controversial drawing “La Bella Principessa”. Laocoon Gallery is proud to present a newly rediscovered portrait by Marchig (1933), of a young actor dressed up as Harlequin. He has his multi-coloured costume but he doesn’t wear a mask, he’s off stage, resting, his arms folded. The emphasis this time is on the face, on the real person of the actor when not possessed by his character.

Cezanne introduced Italian masks into modern painting, and Picasso in his blue period, followed his lead, but the modern painter who most of all chose and cherished Harlequins and Pulcinellas as subjects and mirrors of his own soul is certainly Gino Severini (1883-1966). The frescoes with dancing and playing masquerades that he painted for Sir George Sitwell in his castle at Montegufoni in Tuscany is a joyous little Sistine Chapel of twentieth-century art. A large cartoon by Severini for a “Concert” oil painting of 1942 will be exhibited along with two charming “pochoirs” and a wax pastel drawing of Harlequin and Pulcinella, preparatory for a famous lithograph of the early 50’s.

After the First World War the man who most promoted as the pinnacle of fashion 18th century’s Venitian style’s Bals Masqués was certainly the French painter Jean Gabriel Domergue (1889-1962). His Parisian Bal Venitien at the Opera in 1922 was only the first of a series held subsequently in Monte Carlo, Cannes, Biarritz and Deauville. He would design the costumes, the programmes, the posters and portray the most prominent and aristocratic beauties as provoking Venetian Ladies coming out from some of Casanova’s alcoves. He also decorated residences and public nightspots with gilded canvases wonderfully sketched over with dreamy elegant scenes of Venetian carnival. The like of these, now mostly dispersed if not destroyed, can be seen assembled in Domergue’s own villa in Cannes, now a Museum where the Jury of the Cinema Festival sits when the Palme d’Or awards are decided. Three rare panels gilded with golden leaves by Domergue with gondolas, amorous masks and beautiful venetian ladies are the most visibly precious lots in this exhibition. He is here at the height of his elegant art.

It is the world of Casanova, reinterpreted with the spirit of the “anneés folles”. The famous Venetian womanizer is portrayed in full mask with a masked puppet in each hand. It is the study for the cover of a play, “The Marriage of Casanova” (1910), in which the title role hero acts as puppeteer of all the characters in the plot. It is the work of Oscar Ghiglia (1876-1945), who was Ugo Ojetti’s – Italy’s master art critic of the time and the author of the play – favourite painter.
Metaphysical masks as the centrepieces of enigmatic still lifes are in the paintings of Casorati’s pupil Marisa Mori as well as in a very early and interesting work by Aligi Sassu (1929). Among other drawings we quote also a moving illustration of Harlequin taken to Heaven by angels, a work of the illustrator Enrico Sacchetti that belonged to the famous comic performer Ettore Petrolini. Attributed to Sacchetti is also the original drawing for the cover of one Pirandello’s collection of short stories “Terzetti” of 1912, where a Muse amuses herself wearing one different mask after another. Another Harlequin is painted by contemporary artist Pino Pascali, from the time when he was creating animated films for television advertisement: Arlecchino used to be a very renowned brand of tinned tomatoes.